Izzedin Elzir, imam of Florence and president of the Union of Islamic Communities of Italy, is worried. “Open, transparent mosques are an integral part of our urban, social and cultural fabric,” he told the Observer. But as Italy edges towards a new government featuring the far-right Lega, with its leader, Matteo Salvini, as interior minister, he knows there are almost certain to be tough days ahead.

Lega has forged an alliance with the anti-establishment Five Star Movement after the two parties captured more than 50% of the vote between them in the elections on 4 March. That could herald an administration with the toughest line on immigrants in Italian postwar history.

On Friday, Salvini and the Five Star leader, Luigi di Maio, unveiled a joint policy document containing plans to build more detention centres to accelerate the deportation of an estimated 500,000 illegal immigrants and review migrant rescue missions at sea after they arrive on Italy’s shores. The agreement also calls for a renegotiation of the Dublin refugee treaty, and for “unregistered” Roma camps to be shut down.

As for the mosques, the document calls for imams to be registered with the state. Unauthorised mosques will face “immediate” closure while proposals for the construction of new ones and their funding will be scrutinised. “In regards to what they are saying about the rules,” said Elzir, “I suggest they respect our Italian constitution, which speaks about the very religious freedom that they are trying to limit.”

The programme, which Lega and Five Star vow would bury traditional politics for good, was endorsed by 94% of M5S members in an online vote on Friday and is being put to Lega supporters across Italy before being submitted to the Italian president, Sergio Mattarella, on Monday.

Mattarella will have to ratify the joint programme, a prime minister and the cabinet lineup before a government can be sworn in. It will then face a confidence vote in both houses of parliament. On Saturday, there was still no agreement on who would lead the government. Various names have circulated in the press, among them Lega and Five Star politicians, economists and academics. The smart money is on Salvini becoming interior minister and Di Maio foreign minister.

M5S is the larger party of the two but Salvini’s popularity has strengthened since the elections. Support for the party stands at around 25%, according to the most recent opinion polls, up from 17% in March. The 45-year-old pledged to put “Italians first” during the election campaign and in the midst of the alliance’s negotiations said a new administration would begin only if Lega was given free rein at cracking down on “the business” of illegal immigration. “If I go into government, I want to do what I promised to do,” Salvini said.

In a Facebook video last week, Salvini told supporters he would rid the country of “delinquents” and dismantle the previous administration’s “€50bn [£44bn] migration reception” policy.

Di Maio, 31, was quieter on immigration during the election campaign, but with M5S still garnering around 32% in polls, voters seem to be indifferent towards the party teaming up with a political force that has not only exploited the migration crisis but is also one Di Maio previously insisted he would never ally the party with.

Voters also appear unperturbed by the malice towards foreigners that emanated from Lega during the campaign, including a claim by Attilio Fontana, who was elected president of Lombardy, that the migrant influx threatened to wipe out “our white race”. In February, a far-right sympathiser injured six African migrants in a racially motivated shooting spree in Macerata. And as Di Maio and Salvini celebrated their respective election successes on the morning after the elections, Idy Diene, a Senegalese street vendor who had lived in Italy for more than two decades, died after being shot at six times as he sold his wares on Florence’s Vespucci bridge.

His killer was Roberto Pirrone, a 65-year-old white Italian who told police he had planned to commit suicide. When he couldn’t pluck up the courage to kill himself, he said he shot the first random target. A racist motive was ruled out, prompting fury among the city’s Senegalese community. A further tragic twist revealed that Diene, 54, was the cousin of Samb Modou, who was killed by Gianluca Casseri, a supporter of the neo-fascist group CasaPound, when he opened fire in two of Florence’s central markets in December 2011. A second Senegalese man was killed and three others injured before Casseri turned the gun on himself. 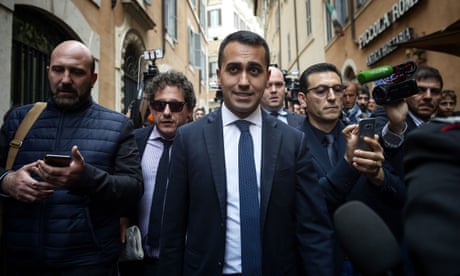 “A friend called to tell me Idy had been killed,” said Mamadou Sall, president of Florence’s Senegalese association. “Straightaway I felt scared, then I remembered the words that came out during the election campaign about immigrants – that we’re thieves, criminals and take Italians’ jobs: violence starts with words.”

Sall is an Italian citizen who has lived in the country for more than 20 years, the last 17 of which he has worked for a plastics company. “We contribute over €20bn a year to the state – if it wasn’t for immigrants, pensions wouldn’t be paid,” he said.

The dream of an early retirement encouraged some of his colleagues to vote for Lega. The joint policy document includes a plan to revoke a 2011 pension reform that raises the retirement age. “They told me: ‘We’re not voting for the League because we’re racist, but because we’ll be able to retire early.’ They’ve been fooled. The proposed flat tax will also backfire – the poor will pay more and the rich will pay nothing.”

Adnan Husein, a 28-year-old from Ghana who arrived in Italy by boat in 2016, said Diene’s murder had revived the same fears he felt at home. “They say they don’t want migrants, but over history so many Italians have migrated, especially to America, because they had to,” he added. “I understand that it wasn’t easy for them, either. Whether a person is white or black, we are all equal, all afraid and all trying to survive.”

Imam Elzir concedes immigration has become a “true” problem for citizens over the past 20 years because of previous governments’ failure to manage it. “So I invite those in the new government to manage immigration, which means respecting the rules and showing solidarity. The electoral campaign is over – they now need to be more responsible instead of creating more fear in our society.”

F.B.I. Used Informant to Investigate Russia Ties to Campaign, Not to Spy, as Trump Claims

After meeting Abadi, Sadr says new government will be ‘inclusive’

‘I found my call in life at that airport’

F.B.I. Used Informant to Investigate Russia Ties to Campaign, Not to Spy, as Trump Claims